Other tourist attractions near Cox's Bazar 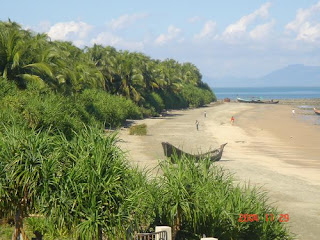 Maheshkhali is a small island (268 square kilometres) off the Cox’s Bazar coast.

The island offers panoramic scenic beauty and is covered by a range of low hills, about 300 feet (91 m) high, streatches through the center of the island and along its eastern coastline. The coasts of the island on the west and north form a low-lying tract that is fringed by the mangrove forests. Adinath Temple, a temple of Shiva, and a Buddhist pagoda are also located on this island.
Sonadia Island, a small crescent shaped island of only 9 square kilometres, it is 7-km north-west of Cox's Bazar. The western side of the island is sandy and different kinds of shells are found on the beach. Off the northern part of the island, there are beds of window pane oysters. During winter, fisherman set up temporary camps on the island and dry their catches of sea fish. Sonadia Island supports the last remaining part of mangrove forest in southeast Bangladesh. Sonadia's mangroves are distinct from the well-known sunderbans, due to their development in a coastal lagoon setting rather than in a delta.Another attraction of this island is the sight of game birds migrating here in great numbers during the winter seasons.
Teknaf, a place situated by the side of Naf river is the southernmost part of mainland Bangladesh. This also marks the end point of Cox's Bazar beach. Tourists usually come here to have a river cruise along beautiful Naf river, which flows between Bangladesh and Myanmar. 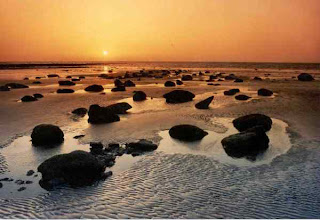 St. Martin's Island, a small island in the northeast part of the Bay of Bengal, about 9 km south of the tip of the Cox's Bazar-Teknaf peninsula. It is the only coral island in Bangladesh. It is about 8 km west of the northwest coast of Myanmar at the mouth of the Naf River. The local name of the island is নারিকেল জিঞ্জিরা Narikel Jinjira (also spelled "Narical Gingira", "Narikel Janjina", and "Narikel Jinjera"), meaning "Coconut Island" in Bengali. St. Martin's Island has become a popular tourist spot. Three shipping liners run daily trips to the island. They are Kutubdia, Sea-Truck and Keary-Sindbad. Tourists can book their trip either from Chittagong or from Cox's Bazar. The surrounding coral reef of the island has an extension named Chera Dwip. The island is home to several endangered species of turtles, as well as the corals, some of which are found only on this island.

Chakaria: One of most large area in Cox's Bazar. 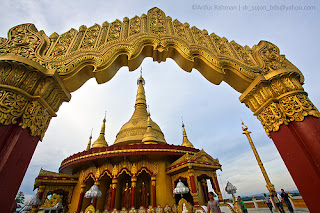 Bandarban: Bandarban lies three hours away from Cox's Bazaar by bus.The Buddha Dhatu Jadi, the largest Buddhist temple in Bangladesh, located in Balaghata, 4 km from the town, is an excellent place to visit. This Theravada Buddhist temple is made completely in the style of South-East Asia and houses the second largest statue of Buddha in Bangladesh. The waterfall named Shoilo Propat at Milanchari is also an excellent site. In addition, the numerous Buddhist temples, known as kyang in local tongue, and vihars in the town include the highly notable the Rajvihar (royal vihar) at Jadipara and the Ujanipara Vihar. Bawm villages around Chimbuk, and Mru villages a little further off, are also lie within a day's journey from the town. Prantik Lake, Jibannagar and Kyachlong Lake are some more places of interest. And, a boat ride on the river Sangu is also an excellent proposition.

Kaptai Lake at Rangamati.
Rangamati: One can reach Rangamati from Cox's Bazar either via Chittagong or Bandarban. Rangamati offers several attractions including local tribal museum, Buddhist temple, tribal markets, hanging bridge and even the palace of traibal kings. The major attraction of the district is Kaptai Lake. It is a man-made lake in the Kaptai upazila of Rangamati District. The lake was created as a result of building the Kaptai Dam on the Karnaphuli River, as part of the Karnaphuli Hydro-electric project. The beautiful view of surrounding green hills has turned the lake into a wonderful spot for  boating and cruising. 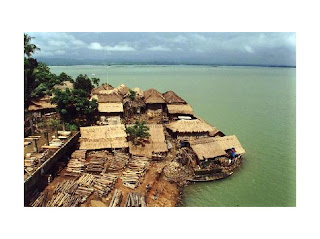 Email ThisBlogThis!Share to TwitterShare to FacebookShare to Pinterest
Labels The locations